skip to main | skip to sidebar

Interview with the Artist Jamie Rauchman 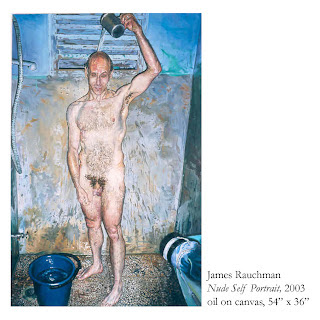 
The artist and documentarian James Rauchman, 55, has been doing a colossal series of work about gay life in Havana, Cuba. What began as the expression of a sexual obsession has grown into a major series of works in different forms - oil, watercolor, film - that embraces the kaleidoscopic contradictions of gay people's experiences in Cuba.

Born off Exit 10 on the turnpike in Metuchen, New Jersey, Rauchman received an MFA from Columbia in 1987. It was there where he met his partner of more than 20 years, the Barnard biologist Paul Hertz, with whom he lives in an art-filled apartment on the Upper West Side.

"We were introduced by a British gay rabbi," Rauchman said, obviously delighting in the transgressiveness.

Rauchman's work has been seen at Marian Locks Gallery in Philadelphia, at CRG Gallery in Chelsea, in the 2005 Havana Biennial, as well as in a special showing organized by the pop duo Ashford and Simpson at their Upper West Side restaurant Sugarbar.

His sensibility is defiantly gay, and sometimes graphic, but the work always maintains an intense sense of location and context that complicates a viewer's expectations about the figures depicted. His newest project, a documentary about the traditional Cuban religious holiday honoring Saint Lazarus, weaves a complex and moving portrait of a gay flower seller whose wares follow a torturous path to an altar.

Shortly before Fidel Castro's official retirement from the Cuban presidency, Rauchman paused from editing the new documentary to discuss his work.


CHRISTOPHER MURRAY: What drew you to making art in Cuba?
JAMES RAUCHMAN: I went to Cuba for the first time in 1997, following Paul, who was working there with some Cuban scientists. I had recently had an exhibition of Riverside Park landscape paintings with the New York City Parks Department, which represented about three years' work. Suddenly I was feeling stuck and was thrashing around looking for some new subject matter, when Cuba came up and grabbed me by the neck. Cuba to me is like a mirror image of the United States - everything is reversed there in terms of official and even societal priorities and I find this utterly fascinating.

Advertisement
CM: How much of your Cuba work is about gay themes?
JR: I did a series of about 40 oil paintings detailing my ill-fated infatuation with a male hustler there. It helped me work out the feelings, so to speak. Since then I've done a series of watercolor portraits of all sorts of people, not gay-themed, and have made a couple of short documentary films that are about spiritual and economic issues in the society.

CM: What have you learned about gay life in Cuba?
JR: I've learned that, like everything else in Cuba, gay life is one big mass of contradictions. On the one hand, societal mores are about 40 years behind enlightened Western understanding of gay people - especially in the countryside. On the other hand, one night in Havana I was invited to a party at a public school where they were celebrating National Teacher's Day by presenting a lip-synching drag show for the pleasure of the local teachers and their children. Strange, but true.

CM: Is the role of art and artists different in a place where there is a dictator?
JR: Here are my biased oversimplifications: In Cuba there are official artists, and there are independent artists, and their roles are different from one another. The official artists do work that is Cuba-centric and nationalistic, and are promoted by the government in the official media, the only media there is. Meanwhile, the independent artists who have been university-trained along the lines of Western conceptualism, and are talented and clever, are scrambling for international exposure, just like artists everywhere.
The totalitarian Cuban cultural bureaucracy is very sophisticated in that they have figured out a way to allow, and even encourage, a kind of free artistic expression, including cultural, political critiques, among a certain segment of their artistic elite, which is available for export, but is not readily accessible at home. Thus they can keep a tight lid on their own population, while appearing to be more liberal than they are from abroad.

CM: Do Cuban gays think life will be better when Fidel Castro is dead?
JR: As I hear about it, there is already a lot of official support for gay people, through the agency of the daughter of Fidel's Castro's brother and [then] Acting President Raul Castro. She is known as an academic sexologist and has spoken out on TV for all sorts of LGBT rights. Too bad the average person has no civil rights to begin with. I think all Cubans in some way wish that that situation might change soon, at least when Fidel dies.

CM: A lot of your work is autobiographical in one way or another. Is it challenging to be in your work as well as creating it?
JR: On the one hand, I think that all artists use their lives as raw material in some way. I mean, what else do you have? But the specific challenge of representing myself, as an image, as a person, in a painting, comes out of a need, which I think some other gay people may share, to compensate for a sense of unreality I felt about myself when growing up. I think I have painted myself as a way of retrieving myself after having blocked myself out, or not accepting myself, for many years.

CM: You've been making documentaries about life in Cuba lately. What drew you to that form?
JR: I love what's going on with the art of documentary film these days. I realized when I was doing the series of paintings about my experiences with the hustler that it was sequenced like a story board for a film, and finally I realized I just had to pick up a camera and try to tell a real life story in that way, in that medium, in order to keep growing as an artist. It was especially exciting to have my first short documentary shown at last year's Woodstock Film Festival.

CM: Your partner Paul Hertz and you have a wonderful collection of contemporary art. When you look at what you and other artists are creating, how do you understand how art is changing now?
JR: Um, can I dodge that question? Paul and I collect what we like and we have reasons for liking what we like, but to try and explain those reasons is like trying to explain your whole life in one sentence. I don't understand how art is changing now, besides becoming more technological. I always thought that the best art was about something that doesn't change.

CM: If you could change something about your life as an artist, what would it be?
JR: Ah, good, now we're getting to the funny questions. Listen, it's been such a struggle getting to a state of basic, artistic self-acceptance, I wouldn't want to be seen being churlish, wishing for something as mediocre as material success. Next question!

CM: If you could have sex with a famous artist, living or dead, who would you pick and why?
JR: My kinky, inquisitive side wants to say Toulouse-Lautrec, but based on the pears and apples, I have to conclude that sex with Cezanne must have been very satisfying. But since you'd probably have to get both of those guys drunk to have sex with them, I'll just sprint ahead to Matthew Barney based on his looks, since he seems to be game for anything.

Christopher Murray, LCSW
I am a licensed clinical social worker and psychotherapist in private practice in New York City. I offer insight-oriented counseling and have expertise in addictions, lesbian and gay issues, smoking cessation, HIV/AIDS, compulsive behaviors and recovery/spirituality. Feel free to contact me at christopher@christophermurray.org for more information, rates or to set up a consultation or go to www.christophermurray.org.